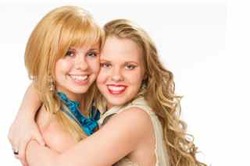 The Veayo Twins, now 17, have been performing live since they were 13, unlike many young performers in today's music scene, the duo didn't cut their teeth with songs written for them. Kristen has been the artistic guiding force from the beginning, and both her songwriting and full-bodied delivery suggest an old soul. Taking almost equally from the songwriters introduced to her by her mother (James Taylor, Carly Simon, Trisha Yearwood) and the bubblegum pop that all pre-teens can't resist (Britney Spears, Aaron Carter, Kelly Clarkson) she has already crafted an album that features gutty R&B, straight-ahead rock, and thoughtful introspection. Many songs target, directly and otherwise, the pain and alienation that young women can face in today's bullying culture, and the two are involved in important work, playing shows for the likes of Bikers Against Bullying and participating in the documentary Bullied to Silence, which took home the prize for Best Content at the 2012 Boston International Film Festival. "Kids come up to us in tears after shows sometimes," Katherine says, "and we know how they feel and wish other kids didn't have to feel that way." For more, go to http://theveayotwins.com/ or the bullying story at http://www.bulliedtosilence.com/About/Stories